CH →
Walkthroughs →
The Price of Peace → Slave to Fear
﻿

The Price of Peace → Slave to Fear

Grab the three artifacts where you start out, but remove the chainmail unless you’ve made Solymr into a combat hero. Then head west. Solymr is all by himself, but that’s ok. The neutral stacks near his starting position are pretty easy, and you should be able to defeat them even if you haven’t developed Solymr’s combat skills. Plus, the nearby genie altar is unguarded, so you can just visit it and recruit genies.

There’s only one path to follow, so follow it to the neutral Order town. Once you’ve captured the town, go north, and when you come to the Order shrine guarded by devils, turn east. Heading east will eventually lead you to an undeveloped neutral Order town, plus another genie altar, but along the way you’ll have to battle waspworts and cyclopes, and you might be better off if Solymr fights those battles alone.

Once you capture the town, explore the area. You’ll find some good news and some bad news. The good news is that there is a gold mine nearby. The bad news is that the mine is guarded by a large stack of Nature units. But then there’s more good news: while you can’t defeat the Nature stack now, neither can the computer players, and so the stack essentially protects your new town. 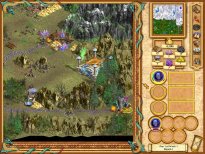 So head on back towards your first town, and then explore to the west. You’ll find a quest hut at (108,91), and when you visit it “Emilia’s helper” will ask you to defeat Green’s starting town, Cauldron Hill. So continue west and do just that. The town is a Life town, so it won’t be much use except for the income, but once you capture it, send an army (it doesn’t need to contain Solymr) back to the quest hut to gain access to a Window of the Magi. The window will show you where you need to go to finish the scenario.

Then explore the southern (non-snowy) half of the map. You should be able to kill everything except for about three or four stacks of neutral creatures. However, leave alone the stack of efreeti guarding the green two-way portal. They’re helping you by preventing computer players from using the portal.

Once you’re ready to head north, visit one of your towns to re-supply your troops (and maybe learn spells or visit a university). Then proceed through the western entrance to the northern half of the map. (That is, the path guarded by a medium-sized stack of Life units.) You’ll first see some behemoths, and even though they’re guarding a dragon exit, go ahead and kill them so you can access the nearby gold mine.

Continuing north, you’ll come to an intersection. Head west and flag the genie altar, and then take the southern branch in the road to an Order town. Capture the town -- which might still be neutral, but, regardless, won’t be overly developed -- and then continue west, turning north when you reach the western edge of the map. You’ll find Orange’s starting town, Brookside.

Brookside might be well defended, but with dozens of genies and magi, not to mention a few titans, you should be able to capture it pretty easily. But if you have trouble, build a caravan in you latest town and ship in some more troops from your other Order towns. It’s also safe to clean out your resources at this point, selling everything but gems (which you need for titans), provided your first two Order towns are already built up with cloud castles. Those two towns will be able to supply you with all the troops you need, so you don’t need to upgrade any of the towns you capture from now on. You can spend all your gold on troops.

Next to Brookside you’ll find a quest gate, but it’ll only let you through after you’ve captured Brookside. So go through and visit the “rendezvous point.” You’ll meet Tharj, who will agree to let you meet Emilia, provided you give him 50 genies. Even if you had 50 genies, such a deal would probably decimate your army, so don’t agree to it. You can use Brookside’s caravan to ferry in 50 genies, and meanwhile you can head east to pester Blue, or you can head back south to deal with some of the neutral creatures you couldn’t kill before.

Once you have 50 genies at Brookside, you can send them in an army alone to complete the quest. That will remove the trees blocking the way to the cottage you saw before (at the northern edge of the map). So once you’re ready to end the mission, go visit the cottage. You won’t have to defeat a large army or anything to get there, so feel free to use up your army to gain as much experience as possible before moving on.