CH →
Walkthroughs →
The Price of Peace → An Unusual Betrayal
﻿

The Price of Peace → An Unusual Betrayal

If either of your heroes has nobility, then be sure to visit your starting town before proceeding. Also, if you have charm or diplomacy, then you should add all the troops from your starting town to your main army, even if you don’t need them. Neutral troops only join you when they think they’re outnumbered, and they don’t give heroes enough credit, so a pair of heroes alone won’t be able to recruit much.

Then start wandering around, killing neutral creatures and collecting resources. Close to your town you’ll find something you never want to see near one of your towns: the exit from a dragon portal. Worse, the entrance to the portal is near Teal’s underground town, which you won’t be able to reach for a while, and so you’ll have to deal with a Teal hero every few days for almost the entire scenario. So make sure you hire a hero to guard your starting town, and also try to keep a reasonable number of troops there.

Note: On day 8 you’ll hear about a prisoner who was taken to a southern island. The prisoner’s name is Reed, and you’ll have to free him later. The two Windows of the Magi near your starting town show the places you’ll have to go to rescue him.

When you come to a point where you have to decide which direction to explore, go west. That’s where the closest neutral Order town is located. After you capture the town, you should once again head west, towards Green. If you have diplomacy or charm, then your starting army might be powerful enough to take on Green as it is. Otherwise, re-supply your army from your two towns, and then head for Green. 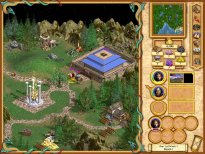 Green’s lands lie beyond a garrison located at (108,31). Green only has one town, but in the area you’ll also find a tree of knowledge, a veteran’s guild, and a few resource buildings. So it’s useful to conquer Green just for the buildings near its town, but it’s also useful because with Green gone, you shouldn’t have a serious threat on any of your towns, since they’re all reasonably far from the remaining players.

When returning from Green, visit the purple portal at (76,47) (near your second town). It’s actually a three-way portal, and one of the exits leads to the northwestern corner of the map. That part of the map is a treasure trove, and you can capture a gold mine there, plus visit the purple keymaster tent. The purple keymaster gate blocks access to a cloud castle (where titans can be recruited) so it’s definitely worthwhile to defeat the griffins guarding the way to the tent so you can pick up the command word.

Then you have a choice about what to do: you can either attack Red, Teal, or Blue. I think the best option is Blue. You can’t finish Blue off yet (it’s Landrew’s color), but you can force Blue to stay in its part of the map. To do that, head south from your second (middle) town, and capture the Life town you find (it starts out neutral, but somebody might have captured it by now). Blue has to pass by the town if it wants to go anywhere, so if you build up the town and feed it troops from your western two towns (leaving your starting town to play watchdog over Teal), then you can go off to conquer Red without having to worry about Blue until the end of the scenario. Plus, by taking the town now, it’ll be easy to re-supply your army once you can get to Landrew.

Note: If you want to take on Teal, the portal leading (eventually) to its area is located at (90,75). The portal is protected by dragons, and you’ll also have to fight a neutral hero before getting to Teal. There isn’t anything interesting in Teal’s part of the world, so it’s probably not worth the hassle to conquer it (unless you want to squeeze every point of experience possible out of the scenario).

So on to Red. The garrison guarding Red’s area is located at (99,138), but before you go through, explore to the west a little and find the cloud castle guarded by the purple keymaster gate. Provided you visited the purple keymaster tent before, capture the castle, grab a couple titans, and then head for Red.

When you pass Red’s garrison, notice the dragon exit. Teal can use that exit as well as the one near your starting town, and it makes blockading Teal just a little more difficult. So move your Teal watchdog army south so it’s roughly between the two dragon exits, and then give chase whenever Teal appears. (If Teal manages to evade your watchdog army, it’s ok. At this point you just need to feed troops into the town near Blue’s garrison, and losing some resource buildings or even a town or two doesn’t matter much.)

Meanwhile, have your main army march south and capture Red’s town. If that doesn’t eliminate Red, then Red probably has an army wandering around in the ocean, or it might have captured the neutral Life town along the eastern edge of the map. Either way, you don’t have to worry. The Life town is easy to get to but difficult to get away from (a dragon portal leads to it, but a big stack of phoenixes blocks the exit), and you’ll probably meet Red in the ocean if that’s where it is.

You now need to rescue Reed, but instead of visiting the shipyard near Red’s town, head east. By going that direction, you can grab about half a dozen ability gems, and then capture a neutral ship. After that, sail to the quest hut at (142,154). As long as Emilia is in your army, the reefs blocking access to Reed’s island will be removed.

Another note: Reed carries over to scenario 8, but only as an ally. So if you can get him a few levels here, you’ll make the last scenario a little bit easier to finish.

After rescuing Reed, sail to the Life town near Blue’s garrison, and re-supply your troops there. Then defeat Blue’s garrison and head west. You’ll find a quest gate, and it’ll only let you pass if you have Reed in your army. He should be there anyway, so pass on through.

Blue’s town is to the south, and you’ll usually find Sir Landrew standing in front of it. Since Blue only has one town, and you have at least four Order towns, the battle shouldn’t be very difficult. Once you defeat Landrew, the scenario will end.