CH →
Walkthroughs →
The Price of Peace → The Servant
﻿

The Price of Peace → The Servant

A few notes before starting: 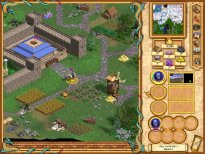 When you start out, the bad news is that you’re back to being level 3. The good news is that you have three genies waiting for you in your starting town. So you can put the genies into your army, separating them into three stacks, and then let them cast song of peace on your enemies while Solymr and your halflings and dwarves dish out the damage. Eventually you should build up your town so you can create a real army, but until then the song of peace trio should get you through most battles.

So explore the area around your town, killing neutral creatures and capturing resources. The only entrance to your lands is southwest of your starting town (guarded by some genies), so explore to the north and east before doubling back to your starting town and taking on the genies.

Of interest near your town you’ll find a quest hut at (74,114). If you give the inhabitant a War Sling, you’ll get Golden Platemail in return. The sling is to the east next to an Oracle, but you’ll have to decide whether you want to give it up or not. The sling is pretty useful, especially if you don’t have basic archery, and the platemail adds one spell point to all spells cast.

You’ll also find a neutral Order town to the northeast, which you should take as soon as your army allows it. Once you’ve done that and cleared everything but the black dragons from the areas around your towns, head west. You’ll quickly encounter Blue’s starting town, which should be easy to take. Don’t worry about upgrading it or recruiting from it (since it’s a Death town), but use it for the added gold, and as a rallying point for your troops.

Then continue west, where you’ll encounter Green. Green will have one or two Chaos towns under its control, but it should still be easy to defeat. Once you reach the northern Chaos town, you might want to circle back to your own towns to learn more spells, and also build and use universities. That’s the best way for Solymr to learn nobility skills. Also be sure to visit the Oracle at (109,49).

Then continue advancing on the computer enemies (Red and Orange still remain, not to mention Teal). To the west of your most northern town is a dead end with a few resource buildings in it. Go ahead and capture the buildings while simultaneously pumping troops into your town. Then, when you head back east, re-supply your army.

Orange’s town is directly north of your northern town. You don’t have to take it if it’s well defended, but you at least have to explore the area since there is an Oracle north of it. Then head east towards Red’s lands. You should find the fourth Oracle along the way.

Once you get to Red’s lands, you don’t necessarily have to take Red’s town, either, but you do have to defeat its main hero, Bloth. If you can catch him out in the open, that makes things easier; otherwise assault the castle. Either way, once Bloth is gone, you can pass through the quest gate behind his town. There is also a portal there, which leads (eventually) to Teal, so you might want to re-supply your army before going through.

Note: If you have to take Red’s castle, and if Red has dragons, then realize that Red will most likely leave its dragons inside the castle until you either breach the gate or poison other troops (and they open the gate while leaving). So once you defeat Red’s ranged troops, you can have your genies cast illusion on your titans several times, and build up a huge stack of titans to deal with the dragons. Then you can use your heroes to draw the dragons out, since they’ll just be resurrected if they die.

Once you go through the portal behind Red’s town (having visited the Oracle next to it first), you’ll find the last Oracle next to an underground tunnel. But the Oracle will be guarded by several dragons, and they might be enough to kill your heroes in one shot. So you might want to leave your heroes behind for the battle, and instead use just titans, genies, and golems. Then try to draw the dragons to the golems while your genies cast illusion and your titans do all the killing. Once you visit the last Oracle, you’ll find the treasure location (nearby) and receive Dragon Scale Armor for your efforts.

Once you go underground, you’ll find lots of two-way portals. But you should only take the yellow one (to the southeast) since that’s the one that leads to Teal. (The others lead to minor treasure rooms, where you can mostly get healing potions.) Eventually you’ll come to the dragon graveyard and find that it’s guarded by a quest gate. The gate requires that you have Dragon Scale Armor, so just go on through.

You’ll find a large group of Teal-flagged dragons beyond the gate. This is the group of dragons you have to kill to finish the scenario, so don’t worry about sparing the lives of your troops, other than Solymr. So if Solymr has a potion of immortality, he should use it right away in the battle, and otherwise he should try to stay out of things as much as possible. Let your other troops (especially the titans) do most of the work, and with repeated shots from the titans and casts of illusion from the genies, you should be able to get by.