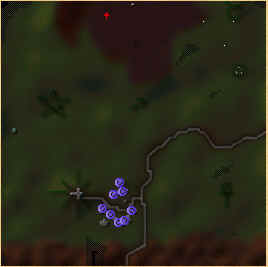 Murmurwoods and Shadowspire are the two toughest areas in the game. They tend to be even more difficult than the elemental planes and the endgame. Murmurwoods is infested with basilisks and will-o-wisps. Make sure your "protection from magic" is on! We recommend you come here before Shadowspire, though, because you need some training in GM body magic before you can handle the high-level magic attacks you'll face in both areas. If you have to pass through Murmurwoods before you are at higher levels (your cleric should be at level 10 in Body Magic – more on that is a second) then do not even venture to the northern half of the map. Just run or fly at full speed along the road to Alvar or to the village of Murmurwoods. When you have a cleric at level 10 in body magic, and if you have found the Prophecies of the Sun book (in the Dagger Island Abandoned Temple) then you are in great shape. Run over to Snowtree’s house, present the book to be promoted to cleric, then get trained to GM in body magic. At that point, your "Protection from Magic" spell will have the power to let you take on Murmurwoods, and Shadowspire. This is so valuable a spell, that as soon as I hit level 7, I head W out of Ravenwoods to Garrote Gorge to become a master. Later, when I reach level 10, I take the same path, but then scoot N out of GG to Murmurwoods just long enough the become GM in Body Magic. It's irritating that expert learning is in Murmurwoods. That's a great skill to develop because of how much it increases your experience gains, but it's impractical to get here until late in the game. It is worth taking the chance, when you have characters at level 4 in Learning, to risk the same quick run W out Ravenshore then N out of GG to get trained as an expert in Murmurwoods. Just don't be dumb early in the game and try to head out of the village to explore! Add Master status when you visit Shadowspire.