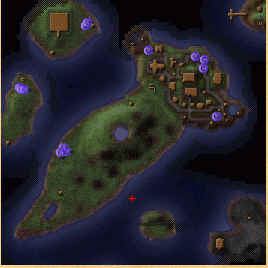 Quest (for later in game):

Don't be in a hurry to leave Dagger Island, or take on the abandoned temple (if you find it early on.) You don't have much of a chance to survive if you leave the island before building your characters to the maximum possible from the trainer on the island – level 5. Six of the quests can be accomplished on the island. And, most importantly, before you head to the mainland you can gather enough skill points to reach expert status in a number of critical skills available on the island – including Bow, Body Magic, and Disarm. Disarm and Body expertise are especially valuable when you take on the temple.

You will come back to Dagger Island later in the game several times. Soon you will be able to return with the antidote for the poisoned well, You might want to use the island’s trainers. Much later you will revisit town hall to get an answer to a quest you receive in Ravage Roaming. Also, you will take on three major areas that you cannot reach until you can fly or waterwalk.