CH →
Walkthroughs →
Glory of Days Past → One Tribe
﻿

Glory of Days Past → One Tribe

The Situation:
While your situation may seem grim you actually pose he advantage in this scenario! Your left city starts with the Grail which provides 3000 gold and a 50% growth for that city. Gold will surely not be a problem and with the power of your two heroes you will no doubt bring swift victory to this scenario.

Border Guards:
There are a lot of them in this scenario so a bit of patience is required. There are four colored Command Words that you need to get in order to reach the Vogel Hero. In addition, there are three black border guards that require payments of some kind.

Town Buildings:
With your amount of income per day being 5000 a day (grail plus City Hall upgrades) trading gold for resources is not a problem. Every now and then, especially at the beginning, you may wish to trade all of your gold for wood/ore since the majority of your buildings require them (especially sine the only building that each town has is a Town Hall). Start with the left town and build up to Cliff Nest (and breeding pens) then the right up to the Behemoth Crag (and breeding pens).

Leveling Up:
It is of course a personal choice but if youÕve been following my walkthroughs: have Waerjak keep developing his tactics skill and your secondary hero develop his Nobility skill. 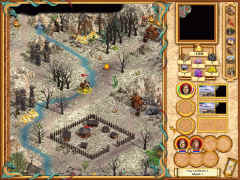 First, have both of the heroesÕ join up into one group. Flag one of the Orc Towers to the left (you will need to hire 40 of them later), then visit then left most town. Select your secondary hero as the governor then begin flagging the mines and collecting the resources Ð traveling counter clock wise.

Above the right town your will eventually see a red key master tent that you need to visit. Continue to collect resources/flag mines by heading to the east. 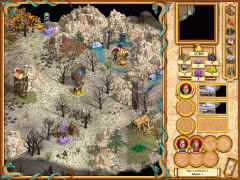 You will see a black border gate that for now you will want to leave alone. Flag the mines, collect the resources that are nearby then resume traveling this time going south.

Here lies a 2nd black border gate that, like the previous, you will for now want to avoid. To the left of the border guard lies a tree of knowledge that you will want to visit in addition to the resources and mines that youÕll want to flag.

Take a few days to ensure that all flags have been mined and all resources collected. Return to the town (if necessary purchase an arsenal) and purchase a few potions of immortality. Activate one for each hero then save the game. 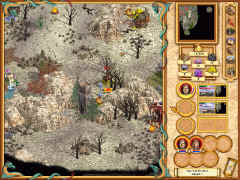 With the game save proceed east until you come to the eastern black border guard. Pay the 6000 gold and 10 ore it requires for it to open then proceed your journey east (staying close to the northern border).

* In the following sections continuing to collect resources and defeating creatures for experience is an option. Your two heroes, by now, should be of significant strength to deal with most creatures. * 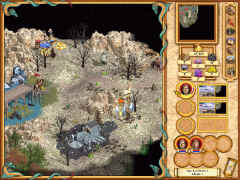 After crossing the bridge keep an eye out for a possibility of there being two altars, one of nobility and one of scouting just to the east. Defeat the creatures that guard them, use the altars, and then continue traveling to the east.

* In the following sections continuing to collect resources and defeating creatures for experience is an option. Your two heroes, by now, should be of significant strength to deal with most creatures. * 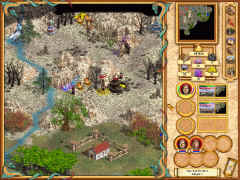 Keeping an out along the northern mountain will reveal a group of creatures guarding a pair of boots of traveling that you will be of help. South of them lie a tree of knowledge (which is north of the sanctuary). Once you visited the tree of knowledge resume your travels to the eastern corner. * You will come across to a Asylum Town that you might wish to build up especially if you favor Dragons. *

Just above the Asylum Town you should notice a Green Keymaster tent guarded by a blue hero (heÕs a static hero whom never moves). Defeat the hero collect the command word then grab the gems that are to the east to improve your attack, defense, and speed rating. You will now want to return to your left town where you will then want to save the game. 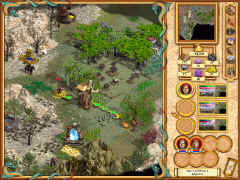 Travel south from the left town head south until you encounter the black border gate. This one requires 6000 gold in order to pass, pay the fee and resume traveling south. * Doing so will increase your army by six Cyclops. Have them move to your left most town for you use them for the final battle. *

Shortly you will come across another Asylum Town that again taken over is an option but not necessary. First, defeat the Hero that is to the left who is currently guarding the Orange Keymaster Tent. Obtain the Command Word then visit the Tree of Knowledge that lies to the south before returning to your northern towns.

Time to conquer:
Head back at youÕre two towns itÕs time to finally win this campaign. Purchase all creatures at both towns (trading resources if necessary) and restock your potions of Immortality. Next, purchase 40 Orc (no more is needed) from one of the Orc Towers then save the game. From the 1st town travel to the southeast to your last black border gate and give them the 40 OrcÕs it requires to pass through. 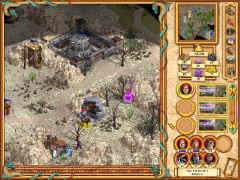 Pass through the border gate where shortly you will see an enemy town that you can ignore. Past it lays four colored border guard whose command words you posses so you can proceed through. * You might wish to the veteranÕs guild that lies to the left of the border guards before heading through them. *

Proceed to the southeast corner, ignoring the enemy towns, where south of a town will be a tunnel. Take the tunnel to travel to the underground then follow the passage north. Defeat the creature the lay within the two garrisons. 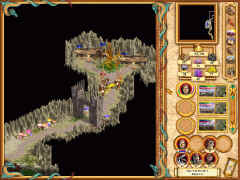 From the northern most garrison travel to the north following the road (you will pass an enemy town and a ore mine). From the ore mine travel east to where you will come across a border guard that only Waerjak and his army can pass. Thus you will need to dismiss your secondary hero (I just discard the hero). In the alcove by one of the Longhouses lies the hero Vogel. Once he has been defeated the scenario and the campaign is won!