CH →
Walkthroughs →
Glory of Days Past → A King's Choice
﻿

Glory of Days Past → A King's Choice 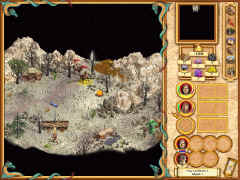 In this scenario you start off with your two heroes and 15 Berserkers in the northern part of the map. Defeat the Cyclops that to the east who are guarding a suit of Elven Chain and Surefooted Boots.

Now travel to the east where shortly you will come across a neutral town. Take the town and build the arsenal inside. Purchase as many Potions of Immortality as you can afford (splitting them up between your heroes). 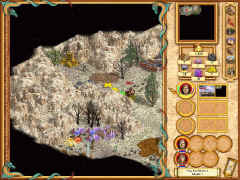 Just to the northeast of this town lies a Orange Keymaster Tent that you’ll want to visit for its command word.

To the south lie your mines, creatures, and a few items. You might wish to defeat the creatures for experience, and if you have another hero besides a Barbarian pick up the Mullich’s Helm of Leadership. The Helm will improve your Morale so it’s no longer negative. 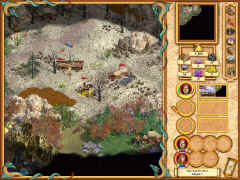 Return to where you first started the scenario and you will see a forest to the south. The entrance is being blocked by a group of Harpies, Bandits, and Berserkers that you should handily defeat.

Follow the path as it leads you to the east whose passage is blocked by a blue enemy hero. Defeat him and then visit the Mercenary Camp for a speed boost.

Traveling to the east will reveal a Green Border Guard whose command word we do not yet have. The purpose of getting this Command Word will allow you to pass though a Border Guard to reach the enemies town. However, you also do not need the Command Word since there is a Border Guard that only Waerjak can pass through (and doing so actually benefit’s him). 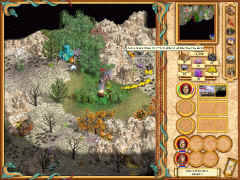 Proceed traveling due east to the northeast corner where you will see a Halberd of Swiftwatch – an awesome weapon because of its longer reach.

Turn course and start traveling to the south where shortly a black Border Guard will come into view that only Waerjak can pass through. Proceed on through following the road keeping an eye out for a Tree of Knowledge. 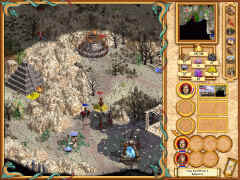 Past the Tree of Knowledge will reveal a blue Hero who is blocking your pass – defeat but do not attack the town that is close by. If Waerjak attacks the town and winds, it will cause him to still loose the scenario.

At the end of this road lies a portal that you’ll want to take. Your Heroes will end up in enemy territory with two towns just to the west. * Remember that it is not necessary to control all enemy towns so you can leave them be. * 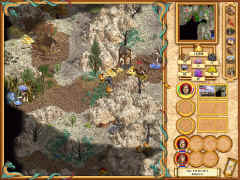 Past the two towns lies a band of behemoths and piles of gold that block your pass. Collect the gold, defeat the behemoths, and then visit the Tree of Knowledge that lies to the north.

Resuming your travels you will come across a Learning Stone, an Enemy Town, and a Arena. * It might help to conquer this town because the Hero that you have to defeat has a nasty habit of retreating to it. * 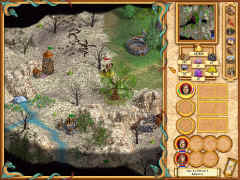 Traveling past this point will present another Arena and a Tree of Knowledge (by this time Waerjak should be maxed out in level).

At this point turn south where you will see the Hero Hundric guarded by a Orange Border Guard. Since you posses the Command Word, drink Potions of Immortality (and any other beneficial potions that you might have), save the game, then attack. You should have no problem defeating him as long as you keep drink Potions of Immortality when ever a Hero dies. One he has been defeated then the scenario is won!