CH →
Walkthroughs →
Glory of Days Past → A Necessary War
﻿

Glory of Days Past → A Necessary War

Victory: Defeat all enemy towns and armies Loss Condition: Lose Hero - Waerjak Carry Over: Waerjak and 2nd hero who have a maximum level of 20.

Town Building Order:
An enemy hero is laying siege to your town, he does not move (if he does its not very far) nor does he attempt to attack the town. However, you can still select the town in order to purchase buildings. When you can afford them build up the town in the following manner: City Hall, Centaur Stables, Harpy Peaks, Wrestling Pits, Cyclops Cave, 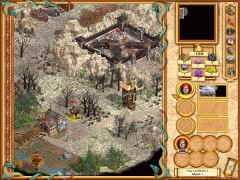 Pick up the axe, the two piles of wood, then visit the Barbarian Camp to the north for a speed boost.

The next few turns you will want to flag the ore mines, collect resources, and flag the Longhouses (though you do not need to recruit any berserkers). Next, defeat the centaurÕs who guard the Learning Stone then visit it for an experience point boost. Finally, defeat the hero that guards your town, flag the Windmill, and collect the resources from the camp fire. 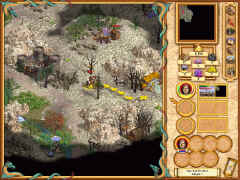 Travel south visiting the War University to see if the skill Pathfinding is available, if it does then purchase the skill. To the east of here lies a tavern guarded by a group of skeletons and ghosts. Destroy them so that you can visit the tavern to hire another Barbarian. * Of course you can hire another type of hero based on your preference. *

Your companion
Keeping your 2nd Barbarian alive will be a tough job at first for creatures will have a tendency to target him instead of your main hero. Always try to have Potions of Immortality activated on both heroes (once you can afford them) and arm the 2nd hero with a missile weapon as soon as possible. The good news is two barbarians are indeed a deadly combo once both are of hire level and the damage you will do is outstanding. 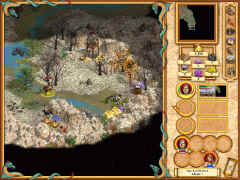 From here, travel south (defeating the bandits in their hideout) to attack the Bandits who guard the Gold Mine. Flag the Gold mine then head to the south where you will see a group of CerberiÕs. Defeat them for a MageÕs Chest, Equestrians Gloves, and 2 Treasure ChestÕs.

Now travel north where shortly you should see a trading post. Defeat the centaurs that guard it then travel to the northeast (passing a Fountain of Strength) to the north of the fountain lays a Gem Mine. Defeat the DwarfÕs, flag the mine, and then collect the resources that lie nearby. Return to town, trade resources into gold, and purchase Potions of Immortality (split between your two heroes).

Groups of creatures that have a ranged attack can be deadly for your 2nd hero. The best tatic to use, until your 2nd hero gains strength, is to place the hero behind your 1st hero. When you do move Waerjak try to keep him in front of your 2nd hero so ranged creatures will attack him instead of the 2nd hero. 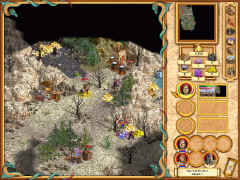 Save the game and then travel east to where you'll see a Blacksmith and a few Mines. First, defeat the nomads/Ballista who guard the Black smith. Repeat the same for the Alchemist Lab and the Gold Mine. Be sure to get the Crest of Valor guarded by squires and crossbowmen, especially if you hired a Hero other than a Barbarian.

Now travel further to the east where shortly you will come to a Border Guard who will only let Waerjak pass. Defeat the group of Evil Eyes that lie within. 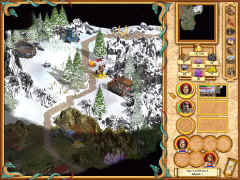 Have Wearjack resume his travels, following the road to the east. The road will soon turn to the north and when it does keep an eye out for a Training Ground and Arena that you will want to visit. Next, defeat the Ice Trolls that block your path, collect the Horse Shoe, and then resume traveling east.

Following the road to the southeast will also reveal a Learning Stone and a Dream Teacher that youÕll want to visit for a experience point boost. To the north you should see a treasure trove consisting of a Golden Plate Mail, resources, and a Crystal Mine. Defeat the creatures that are in the area (having Potions of Immortality activated) then loot the area. 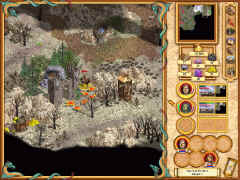 Once the area has been cleared of the resources, traveling to the south will reveal yet another black Border Guard that again, only Waerjak can pass though

Underground travel east to conquer a group of Cerberi. Doing this will, your choice, allow you to remove a Border Guard that blocks a neutral preserve town. If you have a magic using hero read below, otherwise continue on to the next paragraph.

Winning the Scenario:
The next step depends on what type of hero you hired earlier. If you recruited a 2nd Barbarian then proceed on with the next paragraph. If you hired an Preserve, Order, or Chaos hero you might wish to free the Preserve Town (it lies to the sout of the 1st border guard that only Wearjak could pass). Build up it's Druid Hall and corresponding school of magic. By now your hero should be at least near Master in his school. There is also another Preserve town that you will conquer becore finish this scenrio to further you schooling in magic.

Defeat all Heroes/Towns
Keep in mind that all Heroes must be defeated and all enemy towns become under your control. Therefor if you see an enemy pursue him. Defat the hero, any creatures that are the enemeis, then resume with this Walkthrough.* Once you do defeat a town and are told that caravans are on their way you will need to attack those too.

Leveling Up
By now Wearjak should be close to being a Grandmaster in Pathfinding. when he is, start training him Tatcis and if at any point a choice does not appear for Tactics never be shy about placing points into Magic Resistance. 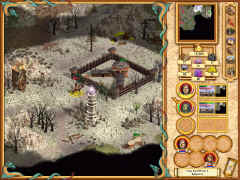 To the east of the border gate lies a red enemy town. Defeat those that occupy the town to claim it yours. If necessary build the arsanel so that your able to puchase Potions of Immoratilty.

Pursue your course south to where you will locate yet another green enemy town. Conquer the town, use the learning stone nearby, then resume traveling to the south. 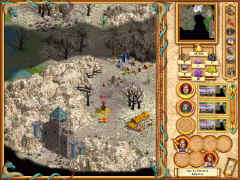 Just past the garrison lies a town which sometimes is neutral or has been takin over by the enemy. If the green/blue enemy has conqured the town then be sure to claim it as your own. * Remember that you need to be the only player to own towns in order to win. * 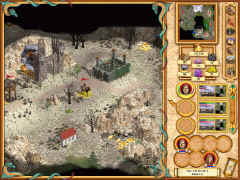 Traveling east past this town is a Blue Keymaster Tent that you might wish to visit in case you missed the last one earlier. In addition you will see another Border Gate that only Waerjak can pass through. Take the tunnel to into the underground.

Underneath the earth your passage will be blocked by a group of earth elementals and Trolls. Defeat them then defeat the Evil Eyes that guard the Gold Mine (flagging the mine is optional). Follow the path as it leads to the east and you will see two groups of Dwarves/Trolodytes. Attack them so that you can get the Orange Command Word, collect the resources, and clear the Lair of the Evil Eyes for a few minor artifacts. 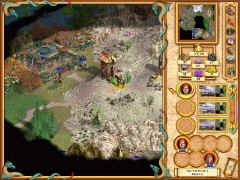 Exit the underground and resume your travels to the east. You'll come across a preserve town that you need to conquer. * If your 2nd hero is either a Chaos, Life, or Nature hero be sure to visit the Conservation to icrease your number of spells. * Purchase Potions of Immortatlity if needed then save the game.

The remaining enemy town lies in the southwestern corner -- just a few turns from here. Travel to the east, stopping at the tree of knowledge for a level boost before doing so. Once at the town, drink Potions of Immortality if needed, then commence the attack.

If the scenario is not won then you have not defeated all of the green/blue enemy units. Scout the map clearing it of any enemy units. Once all enemy units and towns have been defeated victory is yours!