Glory of Days Past → A New Way

Victory: Be the only player to own towns. Loss Condition: Lose the Hero Waerjak. Carry Over: Waerjak who has a maximu level of 12.

Many people have trouble with this campaign and i suspect for the most part it takes them by surprise. By this I mean that you had it easy in the last campaign having more access to troops, a variety of heroes. This scenario (it gets easier later on) however, now you must rely on your Heroes strength and what little troops he can recruit and lastly potions of immortality (see below). * When leveling, always make sure you level up you Combat and Melee skills. If none of these choices are available then choose archery. But at all costs choose Combat and Melee skills above all - this cannot be stressed enough. * 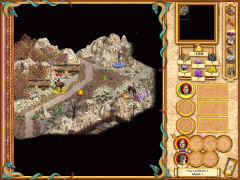 Visit the two longhouses, get the resources from the campfire, then follow the road south. In the next turn or so you will be stopped by a group of centaurs. After a brute test they decide your worthy enough for them to join you. Keep following the road south then east which will reveal a Ore Mine that you will want to flag.

Head further east will reveal a town guarded by a border gate. Click on it to learn that a pirate has stolen the towns cart of ore. They'll hear more about what you have to say about community if you will return to the cart of ore to them. The next turn be sure to flag the Sawmill and a 2nd Ore Mine that lie near the town.

Next head (defeating a group of skeletons) then searching the skeleton that lies nearby for a minor magical item. Further east, a group of Pirates and Bandits will be defending their shipyard. Attack and defeat them then purchase a boat from the shipyard (costs 1000 gold and 10 wood). 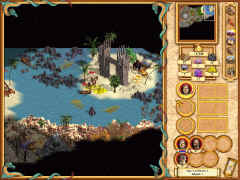 Take the ship north to an island that is not to far off. Disembark the defeat the Hero who has a group of bandit's and pirates. Winning the battle will net you a long sword and a shield. The next few rounds take the time to collect the resources and visit the Green Keymaster Tent for the command word.

Town Building Orders
The first thing that you should notice is that quite a bit of buildings have been disabled -- including the level three and four creature buildings. So keeping that in mind build up the town in the following manner: City Hall, Centaur Stables, Citadel, Harpies Peaks, Arsenal, Wrestling Pits, Arena of Honor. 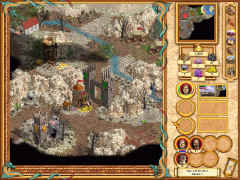 While still in the town place what units lie in the town into your army. Then head south where you will see a few Centaur's guarding a pair of Centuar Stables. Once their defeated recruit what Centuar's there are. To the west of them lie a windmill and healing potion guarded by a few Berserker's.

Learning to fight with potions of Immortality
During the time it takes to build up your town you need to choose the next few battles carefully so that you can up your heroes strength. First, return to the area where you first started the scenario. There defeat the Harpies and centaurs that are there. Near where the centaurs were lies a skeleton that you will want to search for a minor artifact that you will want to acquire. Return to the town but be sure to visit the two Longhouses again. * By this time, if you stuck to the leveling rules first mentioned above, you should have Grandmaster Combat and close to having Expert Melee. *

Now it's time to practice what is mainly going to win us this scenario: using Immortality potions. At the town purchase two-three potions of immortality (make sure they go to your hero, and not one of the creature groups), exit, then save the game. From the town head north passing the ore mine where soon you will encounter Berserker's who are guarding a Crystal Mine. Stop before you are near then, drink a potion of immortality, then save the game again. Attack the Berserker's and watch your Hero defeat them single handily. * If during the combat you need to drink another Potion of Immortality, go ahead and do so. No matter how many times you die, if you have on of these potions activated then you will come back to life. * Use the same tactics you just used to defeat the group of Nomads who guard a Nomad Tent (allows you to recruit Nomads). Grab the healing potions and resources that lie nearby then return to town. Purchase any Potions of Immortality that you can afford then save the game again. 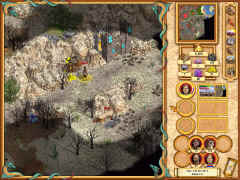 Head south, passing a border gate. Defeat the creatures that guard the crystal mine then flag it. Repeat for the Sulfur Mine that you shortly pass as well.

Just past the border guard you will see a Cyclops Cave guarded by a few Cyclops. Attack them using the Potion of Immortality tactic to keep your hero alive. Afterwards, defeat the few Cyclops that are inside the structure itself then recruit any that are available. Now retract south and defeat the mages that guard the treasure to the south. 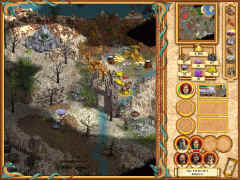 Just to the south of the Cyclops Cave lies the Orange Keymaster Tent, but it is guarded by a pack of Medusas. Defeat them, get the command word, then grab the resources (also search the skeleton for a minor artifact).

Head back to town, purchase any Potions of Immortality that you can afford (within reason) then save the game. From hear head south where shortly you will see the orange Border Guard. 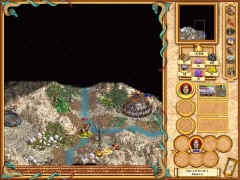 Travel east from the portal and soon an arena will come to sight that you will want to visit. South of the Arena is a blacksmith and a few resources. * In addition there is a Altar of Tactics that you may wish to pick up. * Just east of here (passing another town) you will come across a pair of gloves that you will defiantly want to pick up. * If the gloves are not there then the enemy beat you to them. *

Turn to the north and travel a short distance to a Mercenary Camp. Drink from the pool of power then travel to the north to another border guard. Inside this alcove lies a group of Behomths. Defeat them then be sure to grab the potions from the medicine card and visit the Purple Keymaster Tent.

Now travel to the northeast to yet another Mercenary Camp. To the northeast of this camp lies a group of Griffins that guard the Breastplate of Regeneration. Engage the Griffins and use some of your potions of Immortality to help you defeat them. Once you have the plate be sure to equip it if you're currently wearing some other armor. 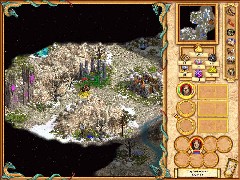 Next, travel to the southeast to a School of War. Check to see if they have a choice to learn Scouting, if so purchase the skill, if not continue on to the next paragraph.

Now travel to the west where a purple border guard should come into view. To the northeast lies an enemy town. Take the town using your new Breastplate of Regeneration and Potions of Immortality. Now all you have to do is hold on to both towns for 3 days and the day is won. * Now hopefully you'll see why I didn't take over the other two neutral towns. *

There are three possible outcomes that usually happen at this point:

Winning by time
The enemy will sometimes be far enough from your towns that three turns will pass before he can reach any of your towns, thus victory is yours

The enemy attacks the town with a strong force:
Things look good, its almost game over, but yet here comes the enemy hero with a large force. Purchase what creatures you can from this town -- and make sure you're in the town when the enemy attacks. Use potions of Immortality! If one round your character dies, be sure to drink a Potion of Immortality as soon as possible. There have been times that I have won the battle by just attacking via retaliatory hits and living on Potions of Immortality. At times you will need to retreat from the battle (once you've hurt the enemy) back to your main town. At this point: recruit all creatures possible, purchase more Potions of Immortality, then return to the enemies town.

Both of you and your enemy's forces are annihilated.
You've taken the enemy town and defeated most of the enemy forces. But the enemy has an extra hero who manages to take over your first town. You know have the advantage because in this town you can recruit 3rd level creatures and most likely the Breeding Pens have been built. There are also two Harpies Peaks nearby that you can recruit harpies from.