CH →
Walkthroughs →
Long Live the King → From Day to Night
﻿

Long Live the King → From Day to Night

To win, you must capture all enemy towns and castles and defeat all enemy heroes. Some Border Guards can only be passed if a Hero carries a Quest Artifact from a previous scenario, but the reward is great indeed. Starting Bonus: Scroll of Death Ripple or Dead Man's Boots or 3 Ghost Dragons. 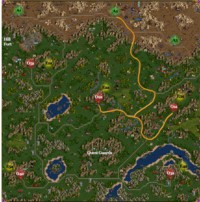 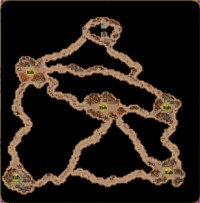 To win this map, you must be aggressive and start taking over the enemy towns on the first day. Not only do they have five towns to your three, but there are many natural resources just lying around that will enable them to build and hire troops more rapidly than you. In this spirit, definitely take the 3 Ghost Dragons as your bonus.

Vokial will be by A2 with the 3 Ghost Dragons and some other troops. Leave the rest of the troops in the castle and head south on the orange path, through the garrison (leave all skeletons there), and head east once you get to the branch and take over O1a. This town doesn't have a Fort so I recommend using it as a money-producing town. Hire another hero to grab up the resources and mines in the area and have Vokial return to the orange path to take over O2a. This town is not restricted in anything it can build so it's a good town to build up in order to better protect both O1a and O2a. I suggest leaving Vokial in the immediate area flagging mines while you build up O2a in order to give him some more troops.

While Vokial is taking over towns, have your other heroes explore the area by A1, A2, and A3. You will need a great deal of wood and ore to build up your town and thankfully, there are many supplies of both resources within easy reach. I recommend building up A1 and using A2 and A3 for gold and resources, especially in the first few weeks. One reason is that it's close to a town that you could take over once you have more troops, but a Hill Fort is close by so there's no reason to build upgraded troop buildings.

From this point on, what you do is mostly dependent on what the enemy does. There are five underground passages and so it's possible for an enemy hero to pop up by O2a when your main hero is by O4a. This is why I recommend building up both A1 and O2a in order to not let your conquests be taken over. Visiting the Quest Guard with your Speculum is very helpful since there is a Cartographer who will reveal most of the map for only 1000 gold. If you don't have the View Air skill, this is a great way to keep track of what the enemy is doing.

What worked well for me was to have Vokial plus some castle troops defeat the enemy heroes he came across until enough castle troops were produced in O2a. I then defeated O3a and hired a hero to flag the mines there. Taking over this town helped me greatly because the hero I hired there was able to prevent the enemy heroes from appearing at E4a and wreaking havoc. I generally took over O4a next and hired a hero to flag the mines as well.

A good idea might be to have a hero stand next to the last remaining town with a good-sized army and defeat all of the scouts that the enemy will periodically send out. This way you won't have to worry about defending all of your towns and can concentrate on finding the last remaining enemy heroes before you take over O5a to win the map.

If you make sure that you have enough troops in each castle to protect it against scouts, have Vokial equipped with his Ghost Dragons and Castle troops (Marksmen and Cavaliers are my personal favorites), and making sure to not let a strong enemy hero take back a town you conquered, you will eventually triumph over this map.

Once all of the enemy heroes are found and defeated, simple give the hero of your choice the troops of your choice and attack O5a. It shouldn't really matter which hero you choose or whether you use Castle or Necromancer troops since the enemy should be so weakened by this point, you should have no problem defeating them.