To win, you must defeat the Death Knight, Mot. Some Border Guards can only be passed if a Hero carries a Quest Artifact from a previous scenario, but the artifact beyond the Border Guard will travel with you to the next scenario. Starting Bonus: Pendant of Death or Scroll of Protection from Earth or 25 Zombies. 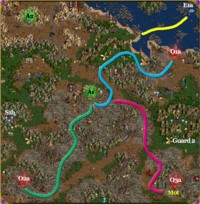 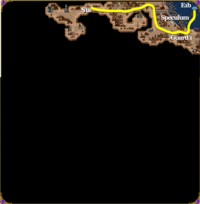 I recommend taking the 25 Zombies as there is a great deal of cursed ground and so magic won't be of much use. None of your heroes will transfer over to the next map so don't spend any time building them up.

Mot is prevented from traveling very far from O3a so your first priority should be to take over O1a and O2a to tip the odds in your favor. I used A2 as a money/resource generator because it is so far north of the enemy towns and used A1 and later O2a as my main creature generators. I primarily relied on Vampire Lords and Power Liches as my forces, but you can use whatever troops you favor most.

It's impossible to say whether you should follow the blue path to take over O1a before or after you take the green path to take over O2a because it all depends on what the enemy does. I took over O1a in the fourth week and then I built up A2, scouted the area, defeated enemy heroes, and took over O2a in the start of the second month.

Now that you have taken most of the enemy's gold and resources away from them, you should take the time to go on the water on the yellow path. Give that hero the Collar of Conjuring and head to S1a to appear in the underground at S1b. Go through Guard 1 (requires the Collar of Conjuring) and pick up the Speculum which will carry on to the next map. The Seer at S1a asks for the Badge of Courage for a +2 spell power to that hero. Since none of these heroes transfer over to the next map and since there is so much cursed ground, it's a useless quest. There are lots of creature generators but they are all guarded so you'd better bring down some troops if you want to fight them. If you are playing this map before Season of Harvest than you can use the Spirit of Oppression to get into Guard 2.

Once you have enough troops, give them to your best hero (preferably might due to the cursed ground) and attack O3a. You get a better score if you capture the town with Mot not in it. You do this by sending a weak hero close to O3a and the hero with all of the troops far enough away so that Mot attacks the weak hero but close enough so your strong hero can make it into O3a with Mot still out of it. Then Mot will attack the town and with the Castle now on your side, it should be an easy battle. Especially since Mot will most likely be much weaker than your strongest hero (he only had primary skills of 3 2 3 3 when I fought him) and you will have a much bigger army.