To win, you must bring the Spirit of Oppression to the city of Stonecastle within 3 months. Seek out the Seer - completing the Seer's Quest will allow you to carry the reward to the next scenario. Starting Bonus: Scroll of Death Ripple or 1 Black Knight or Skeleton Transformer. 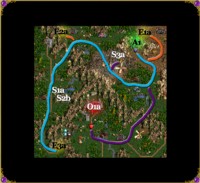 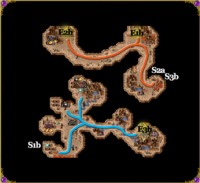 This is a very interesting map as it combines a very limited enemy who won't attack your town along with three Seer quests to fulfill. If you dawdle you will certainly reach the three-month limit so take the Black Knight as your bonus. None of your heroes will transfer over to the next map so don't spend any time building them up.

There is no need to worry about being attacked since the enemy will never travel from from his town and you can build up troops right up until the time limit if you want to. Start out by giving your hero all of the troops and following the teal path. There are 10 Archers and 10 Pikeman in each of the Garrisons but they should be not difficult to defeat. Be sure to visit the Shrine along the path to get the Blind magic spell before heading into E3a. You'll appear underground at E3b where you'll have to head west where there are quite a few Monks and Zealots guarding your way. They are in small numbers but, considering how slow low-level undead units are, they can do a great deal of damage before you reach them. If you got the Blind spell, that will help you out immensely and there is a Magic Well in the area that you can use between battles. Your true goal is to get S1b (Pendent of Total Recall) which is lying out in the open and is the first artifact that you need to get the Spirit of Oppression. Now go back up through E3b and give the Pendent of Total Recall to S1a to get a Hourglass of the Evil Hour. Now go north on the teal path and onto the orange path by E2a to head to a different area of the underground. Head along the orange path to hand S2a the hourglass to get the Pendent of Dispassion in return. Head north to E1b to appear right next to your town where you can upgrade your existing troops and get new ones.<

You should give the main hero all of the troops and first visit S3a to exchange the Pendent of Dispassion for the Spirit of Oppression which is the artifact you need to bring to the enemy town once you've conquered it. Then go south along the purple path to defeat the only enemy hero. His troops consist of a few Archers, Marksmen, and Swordsmen but around 200 Pikemen which are the main threat. Defeat them in any way possible. Once you are victorious, simply visit O1a with the Spirit of Oppression in your inventory to win the map. Remember, no heroes are transferred over so there is no reason to hire any other heroes or have them visit any Places of Learning.