The True Blade → Seeking the Steel 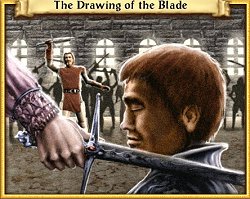 The scenario takes place on a small map, and there isn't an underground section, but you still need to move quickly. The army you have now (with five heroes) isn't going to get much stronger, but the castle you need to take at the end will keep growing. So try to keep moving forward without wasting any time.

You'll face some high level sets of nature creatures on the map, and, depending upon how you've developed your heroes, they might either be easy or difficult to kill. If you've developed combat skills, then they should be easy, and you can pick a variety of ways to kill them. Otherwise, if, say, water elementals kill your heroes in one blast, you need to rely heavily on spells like song of peace, (mass) nature ward, and martyr (once you have pikemen to absorb the damage). 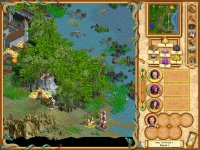 A little to the west you'll find three guardhouses (pikemen) and a knight's chapter (champions). You should flag all the buildings, but you might want to leave the pikemen behind. The pikemen can pick up all the stuff on the ground, and your army will move faster without them. But let the pikemen trail along behind, just in case you need them in the battles ahead.

Then continue west, killing whatever you want along the way. (You'll mostly rely on trees of knowledge to level up from here on out, so killing isn't as important.) Eventually you'll come to a blue keymaster gate -- but find that the blue keymaster tent is on the other side. Get used to it. This is just the first example of many in the campaigns where the computer players will get one-way gates in their favor. So you can't kill the Blue player behind the gate. All you have to do is reach the swordbearer before Blue does. (And if you leave the efreeti in front of the gate, Blue might not ever venture out of its area.)

So ignore Blue and continue following the path west, north, and then finally east. Along the way you should be sure to stop at the second knight's chapter, and also the blacksmith, but only stop for resources if you need them and the pikemen aren't collecting them fast enough.

At the end of the path you'll find the gate to Orange's area, and it'll be guarded by two sets of chaos creatures. These shouldn't be too hard, but concentrate on the medusae first since they can kill your heroes in one shot.

Past the gate, you might want to visit the sacred fountain or the learning stone, but the oracle will only lead to a scarab of summoning (which doubles summoning output), so skip that. Then attack Orange. If you've been quick, then Orange won't have as many troops as you found at the gate, and so it should go down easily. Plus, Mastero (a level 30 pyromancer) will probably stay outside the castle, and so you won't have to deal with a siege attack. Once Mastero dies, the scenario will end.