To win, you must capture all enemy towns and castles and defeat all enemy heroes. Some Border Guards can only be passed if a Hero carries a Quest Artifact from a previous scenario, but the artifact beyond the Border Guard will travel with you to the next scenario. Starting Bonus: Expert Logistics or Dwarven Shield or Centaur's Axe. 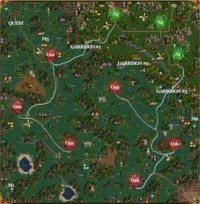 Based on the large amount of swamp on this map, take the Expert Logistics as your bonus and try to get the Pathfinding secondary skill for your main hero. That's not necessary but it will certainly help since you won't get Town Portal until fairly late in the map, if at all.

Neutral Affairs is somewhat like the previous map in that you are separated from the enemy by garrisons, so you have at least the first map to build up your towns in peace. In addition, the enemies are not allied so they will be fighting against each other and generally keeping each other occupied.

While you're building up your towns hire a second hero and explore the area, making sure to flag the wood and ore mines. Also visit the Wind Mills, Water Wheel, and Refugee Camps every week. Just before you head out to the swamp, feel free to attack the Crusaders guarding the useful artifacts and mines in your area.

When you're ready (waiting until month 2 would be a good idea) take the Tower troops through Garrison #1 on the green path to attack the Fortress towns and the Castle troops through Garrison #3 on the blue path to attack the Stronghold towns. You will most likely have a lot of running around as you prevent the heroes from sneaking into your area and taking over your towns. It's impossible to know what the enemies are going to do so all I can say is to keep track of them and defeating them before they can do serious damage, such as taking over towns you conquered. I also recommend using heroes to transport extra troops if you need them as it would take much too long for your main heroes to do it and that would leave your conquered towns defenseless. Using the roads will greatly increase your speed and you should use them when you can. The mirrors can also be useful and you can cycle through all of them by not moving and pressing the space bar until you get where you want to.

Before you take over the last town or hero, be sure to visit the Quest guard with the Badge of Courage to get the Pendent of Life which will carry over to the next map. Once you do this, there's nothing else to do and since your heroes don't carry over you shouldn't spend the time to build up their skills. Defeat the last enemy to finish this map.