Crag Hack must acquire the Rib Cage of Power from one of the Liches haunting the swamp of Ferris to win the scenario. However, if Crag Hack is defeated in combat, the scenario is lost. Crag Hack is limited to level 20 but will carry over his experience, skills and spells on to the next scenario. 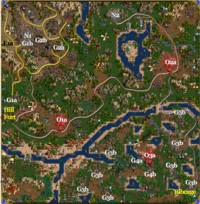 Since you'll be facing a lot of undead and ranged shooters, the 30 Orc Chieftains might be a good choice. There are also a lot of wandering stacks of Orcs and Orc Chieftains so having some in your army will make them more likely to join you, especially if you have the Diplomacy skill. Personally, I always use Cyclops and Cyclops Kings if I want a ranged troop so I picked the 5 Ogres. However, both are viable alternatives so pick the one that fits your playing style.

This map is a refreshing breather from the last map but don't think you can hang back and attack in month 3 because the enemy heroes are at level 18 and will decimate you.

You start out with no town but one is close by, behind a Guard Tower so your first task is to find the Guard Tent at G1a which is south of your town along the yellow path. Don't stop to pick up any resources since you want to start producing troops as soon as possible. Once you've done that, spend the first two to three weeks exploring the area close to your town along the yellow paths. Hiring a secondary hero to pick up the many resource piles is a good idea, especially after Crag attacks the wandering stacks defending some of them. Be sure to flag the Roc and Ogre creature dwellings every week since they'll enable you to go on the offensive much sooner. Don't bother building the upgraded creature buildings since there's a Hill Fort to the west of O1a which can upgrade them at a much cheaper cost. I used the typical Thunderbirds, Ogre Magi, and Ancient Behemoths Stronghold army that has helped me out so well before. Before you start the offense, go down E1a to visit the black tent since you'll need it to win the map. I suggest start attacking at the start of the third week so the enemy won't have an overwhelming force.

Now you are going to take over the first two enemy towns by following the red path to the Hill Fort to upgrade your army and then east to O1a. One good idea is to give your secondary hero all of the troops you don't want and have him follow you to pick flag resource mines. Make sure there are no enemy heroes in the area and head east along the red path to O2a. Check for enemy heroes and then travel north to the last neutral town. Now you can relax a bit since the computer doesn't seem to want to come up through the gate separating your land and theirs. In addition, there's no rush to take over the last enemy town because G4a, which opens G4b to get to O3a, is inside G4b so you can't get to it.

Once you've replenished your troops (if necessary) you can follow the purple path to get the Ribcage. If Crag is below level 20, you might want to fight a couple of the Power Liche stacks or even take on one of the enemy heroes if you feel up to it. The next map is going to be awful so gaining a level or two will be helpful. There aren't many places of learning in the area by O3a so you won't gain anything by traveling through the area. So make your way to the extreme southeast corner to get the Rib Cage of Power from the wandering stack of Power Liches to win the map.