Seize the Blackshard of the Dead Knight from Marzeth to win the scenario. However, if Crag Hack is defeated in combat, the scenario is lost. Crag Hack is limited to level 15 but will carry over his experience, skills and spells on to the next scenario. 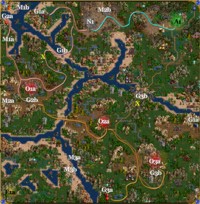 I recommending picking the 5,000 gold as your bonus as Orcs won't be the mainstay of your army and you'll find a better weapon to use than the Gnoll's Flail. The 5,000 gold is especially useful if you're playing on a harder difficulty level as your starting town is limited to the Town Hall which only produces 500 gold per day.

This map is one of the most frustrating I've ever played and while I was only able to beat it by turning the difficulty down to Easy, I am confident that my tactics will work on whatever difficulty you play at.

You start out with a Stronghold that can't build past a Town Hall or a Tavern and is not built-up at all. There's another Stronghold to the west past the wandering stack of Ogre Magi that can build a City Hall and Tavern, but can't build a Fort and is severely limited in what it can build. Meanwhile, the enemy has three towns that are built up and only have very minor restrictions (no Portals of Glory) and many creature generators which the computer has no compunction about visiting every week. You also have to visit Guard Tents to be able to reach these towns which takes days of travel time. Days that the computer uses to acquire more and more troops. The key to victory is speed and in making your way to enemy territory as fast as possible. Therefore, the first two to three weeks should be spent picking up wood, ore, gold, and gold mines near your area while you collect as many Ogre Magi, Rocs/Thunderbirds, and Behemoths/Ancient Behemoths as possible. You could replace the Rocs/Thunderbirds with Cyclops Kings but since I had Expert Ballistics that wasn't a priority for me. Once you have these troops, head west on the blue path to grab N1 and defeat any hero you see if you think you can defeat them. Better get them now then later when they come back with a huge army.

You will probably lose both A1 and N1 later but they provide you with gold and resources while you have them. Continue west along the red path to find 2 Fairie Dragons that you have to defeat to get to G1a to get past G1b that is the only way to get to the enemy territory. The enemy doesn't seem to want to attack this wandering stack and I wouldn't suggest waiting until they do. However, your Ancient Behemoths should be able to kill them easily so if you have Haste, now is the time to use it. Ignore the other goodies lying around as you can hire a hero from N1 to grab them for you. Crag Hack should go back east on the red path and then south. Depending on what day of the week it is and how many troops are in A1, you can always use a hero to shuttle them to replenish any troops Crag lost. However, Crag shouldn't go back to A1 himself since every day you dawdle is a day the computer is using to amass more troops.

Once you've made it past G1b, grab the +1 Attack Skill and head south on the red line. There's an ambush of 60 Swordsmen and one Crusader but they will probably be more an annoyance than a threat. You now see the first town you have to overtake but you can't get to it because there's a gate just in front of that requires you visiting a tent first. At this point you can have Crag visit G2a (north along the red path) or you can bring along a secondary hero to do that while Crag flags mines and visits the Merletto Tower for the +1 Defense. Either way, have Crag attack O1a, preferably before day 1 so the enemy doesn't have fresh troops to hire. It seems that the computer always hires all of the troops that were available before you attacked so you can't count on any reinforcements after capturing the castles. However, if you took over O1a near the end of the week you can always hire a hero there to ferry you troops at the start of the next week. Whatever you decide to do, don't dawdle and have Crag follow the orange path to the southeast.

If you follow the orange path you'll come across an ungaurded O2a which you can attack if you wish. It might be a good idea as the enemy hero(es) like to hang around this area so you can take advantage of the Magic Plain to use View Air to determine where they are. If one is close by, it would be a good idea to attack them when they're outside of a castle. You'll have enough problems with being outnumbered without having to deal with the Archer Towers too. Plus, if you attack them before they can get reinforcements that will make the battle go much easier. Once you've defeated any hero which is close by and taken over O2a, you can focus on O3a and any other heroes which may still be active. First though, you have to visit a Guard Tent at G3a which is southwest of O3a. As with O2a, if you see an enemy hero heading for O3a to get reinforcements, it's best to try to cut them off by defeating them in battle than in trying to get to G3a first. Once they're gone, you can go to G3a and then attack O3a since you'll face a hopefully much smaller army. Once you've defeated all of the enemy heroes and taken over all three towns you can breathe a huge sigh of relief. Marzeth is underground and won't venture to the surface so you're free to amass a huge army and have Crag visit all of the places of learning.

There are only a few places of learning that you should make it a point to visit. There's the School of War which is east of O2a, Marletto's tower which is northwest of O1a, the Star Axis south of A1, and the Arena southeast of O3a. There are a lot of Witch's Huts but have a secondary hero visit them since you don't want to saddle Crag with a bad skill. Since no other hero travels with you, you don't have to take the time to level them up despite there being a very handy Altar of Sacrifice on the way to the underground. I doubt you'll need it as Crag will probably have reached the level 15 limit with all of the fighting he engaged in. Once you have a huge army, go underground and face Marzeth. It should be a piece of cake to what you had to go through to get this far since he doesn't have a lot of troops, his primary stats will be lower than yours, and he doesn't have any powerful magic spells. Once you've defeated him you'll get the Blackshard to earn a much deserved victory.