Crag Hack must seize the first artifact Sandro requires, the Skull Helmet, from Barshon the Barbarian to win the scenario. However, if Crag Hack is defeated in combat, the scenario is lost. Crag Hack is limited to level 10 but will carry over his experience, skills and spells on to the next scenario. 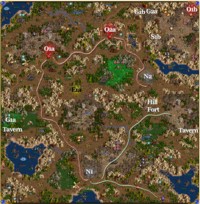 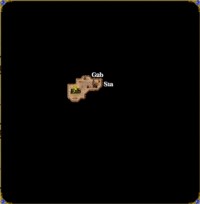 I recommend taking the 15 Orcs as your starting bonus because of their very useful ranged attack and because they have the most health out of the choices.

You start out in the southeast corner without a town so your first goal is to follow the road up to the northwest to conquer the town before you are eliminated. You have to defeat an enemy first but with the Orcs you will emerge victorious with few casualties. Once you take over N1 you find that you have another problem as you won't be able to build either a Tavern or a Capitol. Once you have hired the troops available at N1, continue along the blue path to the northeast past the Hill Fort and to a Tavern where you can hire two heroes. Give Crag the extra troops and have these two heros flagging mines and picking up loose resources. There are a few recruiting structures so be sure to have Crag visit them for the much needed extra troops. You will likely be hurting for money so be sure to make flagging the gold mines and picking up gold a top priority. There's a mine to your southwest of N1 that you can easily flag and should as soon as possible.

While you're getting gold and resources, I recommend that you get Rocs and the Citadel along with as many of the prerequisites for the City Hall as you're able to afford. The second week get the City Hall, a Castle, Ogres, and Behemoths at the very least. Don't bother getting the upgraded buildings as you will use the Hill Fort.

Around the fourth week or the start of the second month, the Red enemy will likely defeat the dragons separating their area from yours which means that you should be ready to use the Hill Fort and face them in battle. What I did was have Crag take the Thunderbirds, Ancient Behemoths, and Ogre Magi and leave the other troops at the Castle along with an extra hero. That was Crag could concentrate on the enemy heroes with the larger amount of troops while letting the other hero defeat scouts and weaker enemies with the lower-level creatures. There will be some good battles here but with Crag's superior attack skill and magic skills (Mass Haste will help you a lot) you will emerge superior with the red enemy defeated. Just be sure to not advance until you have defeated the enemy heroes that are near each town you take over as there's nothing more irritating than an enemy who slips in behind your advance. You might not have View Air so you can always stay an extra day at a town you just took over to see if the enemy tries to take it back. After defeating them in the safety of the town, then you can advance along the red path and defeat the red enemy.

Now you can relax and have Crag visit any of the Places of Learning and increase his level until he has reached level 10. There are quite a few Witch's Huts so have your secondary heroes visit them and give Crag what you think are the best. One question I have when playing a Might hero who will travel from map to map is whether to give him Wisdom or not. Since you will have many opportunities to get level 4 and 5 Mage Guilds and since getting Town Portal will be very important I think that the answer to this question should be yes. If you do decide to get Wisdom, be sure to build the level 4 Mage Guild in N2 as well as the level 3 Mage Guilds in the rest of the towns. While Crag won't have as high of Power or Knowledge as a Magic hero will (even after visiting all of the places of learning) the benefits that high-level Earth and/or Air magic have are too important to pass up.

When you're ready to end this map, visit G1a which is northwest of N1 which opens up G1b which can be found northeast of O2a and lets you have access to G2a. Now have Crag travel through the underground at E1a which is southeast of O1a, go through G2b, and attack the 80 Trolls which completes the quest at the tower guarding the only entrance into Barshon the Barbarian's territory which was your goal from the very start. Be sure to give Crag additional troops and attack Barshon. He shouldn't have any Behemoths but will have quite a few Thunderbirds. After defeating him, you will have won this map.