CH →
Walkthroughs →
Festival of Life → Taming of the Wild
﻿

The task of killing Razor Claw has been given to you. Prove yourself and defeat the Ancient Behemoth in three months or lose your chance at becoming King. If Kilgor is lost then his chance to become king ends also. Kilgor is limited to twelfth level. Starting Bonus: 1 Behemoth or 4 Cyclops or 8 Rocs. 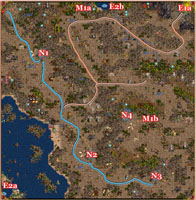 I would take the Behemoth as the starting bonus as it will be able to defeat all of the wandering stacks around N1, N2, and N3 with minimal assistance from other troops. Even though you can't hire more Behemoths it was able to last much longer than either the Cyclops or the Rocs. I was able to keep the Behemoth to the end of the map and upgrade it to an Ancient Behemoth at a Hill Fort which helped out at the final battle.

Even though you don't have any opponents on this map, it doesn't mean you can relax since you have a time limit of three months. You start out with no town so head south on the blue path and take over N1 which shouldn't be a problem. You can't build a City Hall so gold will be hard to come by until you can take over the other towns. I would focus on building a Castle and the Roc structure as soon as possible so flagging the Wood and Ore and Gold mines around N1 is a top priority. There are many loose piles of gold north of N1 which are a big boost and should be picked up. I built a Citadel in the first week and a Castle in the second. Be careful with the Witch's Tower as it gives a random skill which may or may not be useful.

Sometime in the second week continue on the blue path south and take a side trip to the creature generators to get the extra troops. Go to N2 to take that and then on to N3 to take that as well. They are lightly defended and shouldn't be a problem, especially with the Behemoth. Be sure to visit all of the places of learning since you want Kilgor to be as strong as possible.

These extra towns are useful not only for the extra troops and gold but for the magic spells if you give Kilgor Wisdom and a magic school. I gave him both Wisdom and the Air magic school primarily for Mass Haste. Wisdom is optional but I was faced with either that or Navigation so I picked the better of the two.

Starting in the second month I would get as many troops as possible and take the red path. It's the shortest of the possible paths and it goes by all of the places of learning except for the Arena. You will have to battle past wandering stacks of Cyclops Kings and Thunderbirds which aren't that bad, especially if you have Tactics and/or Mass Haste. There are many artifacts most of which are guarded so unless you are not level 12 be sure to pick and choose which artifact you think will benefit you the best. Just be sure to not lose too many troops since you will need them for the Ancient Behemoth.