Enough is Enough → Wrath of Nature

Don't be fooled by the small size of the last map of the Enough is Enough campaign. That scenario might require more than one attempt, and at the Champion level, it is next to impossible. You start on the West side of the map inside a partly developed city just outside a fortress. At the center is the city you need to capture, but to do so you will need to outmaneuver thousands of enemy units.

The map requires a quick build-up. Erutan should be able to fight alone for some time, so at first send back any unit you may encounter back to the home city. Immediatly attack the structure to the North and the Elf dwelling to the South. In your city, you should forget about Elves, whose dwelling require too much wood, and aim for Tigers and Griffins instead. As for the level four dwelling, I chose the Faerie Dragons, but Phoenixes might be a good idea as well. Consider building a Citadel and a Castle early during the scenario, since enemies might knock at your door soon. 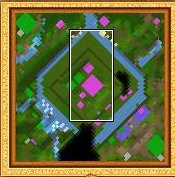 Past the bridge you will find a Sawmill and an Ore mine, both of which should be captured immediately. Bind Wound and Erutan's range attack superiority should help you against shooters, while Quicksand will take care of walkers. A Gold Mine can be found on the road going South, and with some luck the computer player won't bother capturing it for a while. Your travel to the South should end at the entrance of the fortress, which contains an army too strong for you right now. Go back to the North and then to the East. Cross the bridge and proceed to the East side of the fortress.

This is where the fun begins, and unfortunately (or fortunately) your actions until the end of the scenario will depend on the behavior of the computer player. I recruited a Druid, teached him a few Nature spells and sent him to meet Erutan. That Druid should focus on Nature skills only, and disregard any Combat skill that might be offered during leveling. Travel to the South with the duo and retreat to your starting city should you get into trouble.

There are two things you can do whenever the computer player leaves you alone. First of all, you might want to visit the underground level, where a few gold mines and various treasures are waiting for you. Most of them are well guarded, but a single gold mine is undefended near the entrance. The computer player will also visit the underground on a regular basis, but you should definitely benefit from the extra income whenever possible. Secondly, there is a major quest in the building defended by Dark Champions. Completing that quest not only gives you an additional city that receives free units every week, it opens a secret entrance in the back of the fortress that allows a quick attack to the central city. It can make completing the scenario much more easier, since the other paths to the main target are heavily defended. To defeat the Dark Champions, either recruit additional units from your city or wait for the computer player to do the job himself. I'm saying this because after I gathered all the units and went back near the underground entrance, the quest building was already undefended. Another quest can be found a little to the South, where you can trade 12,000 gold and some gems for arrow artifacts. I did not bother completing it and kept my money for an emergency.

To complete your scenario, Erutan should continue gaining experience, and use the Tree near the city to the South when the time is right (i.e. just after reaching a high level). Keep accumulating creatures in both of your cities until your army is strong enough to finish the computer player. Keep moving at all time with Erutan and your second hero. In some cases you might be able to ambush an enemy hero. In other cases you might find out that the capital is lightly defended and that the time has come for the final showdown. I was lucky enough to have the capital defended by a single high-level Cardinal with packs of high-level creatures. When only heroes and a few creatures were still standing on the battlefield, Erutan managed to summon dozens of Griffins to take down the regenerating Cardinal. When the last city is captured, the campaign comes to its conclusion.