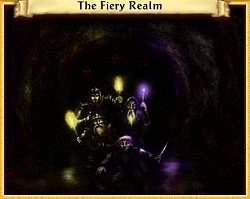 Put the vampire with Gauldoth, leave the zombies and skeletons in their own army, and then head east, flagging whatever you want along the way. When you get to the volcanic terrain, head east some more until you find a neutral Death town. The town shouldn’t be very well defended, and what defenses it has should be melee troops. So use poison and summoned imps to capture the town, or just bang your way through with Gauldoth if you’ve developed him that way.

Once the town is yours, circle around it to the west. You’ll have to defeat some skeletons and ghosts, but eventually you’ll come to a gold mine (north of the town), which will make developing your town much easier. Then head back southwest to a little dead-end area west of the pyramid. You’ll only find an alchemist’s lab guarded by some vampires there, but by the time you flag the lab and get back to your town, you should have been able to build it up enough that you can re-supply your army and learn some level 2-5 spells.

Then head southwest again, but this time stay east of the pyramid (the pyramid itself is probably too tough to deal with right now). Loop around the mountains until you’re heading northeast, but notice the red two-way portal being guarded by some bone dragons. That portal is one of only two ways your enemies can get into your part of the map, so you should leave the dragons to guard it while you keep exploring. 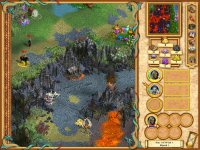 Continuing northeast you’ll find some useful things: another gold mine, a vampire mansion, plus some resource buildings and artifacts. You’ll also find one of the green keymaster gates leading to Green’s lands, but Green doesn’t have access to the green keymaster tent, so it’s a gate only you can use (eventually). Once you’ve cleaned out what you can, head back to the two-way portal, re-supply your army, and then go through.

Note: For some reason Green is sometimes able to cheat and pass through the green keymaster gate, but I’m not sure what allows it to happen.

You won’t have many options about where to go, so just follow the path until you reach one of Blue’s towns. It should have a fully upgraded tower of darkness, so be sure to visit the town once you capture it. Then follow the road some more, and head mostly north once you hit the intersection. You’ll find Blue’s other town there (or it might be neutral), and you should capture it as well. Once Blue is eliminated, your lands will be perfectly safe, because Green won’t be able to get to them.

So take your time and explore the area around Blue’s two former towns. You should find another vampire mansion, plus a quest gate leading to the green keymaster tent. The quest dialogue asks that you bring back 8 bone dragons to open the gate, but I’ve completed the quest with as few as four. Once you have the command word, and once you’ve re-supplied your army, head east and enter Green’s lands.

Green is optional, so explore the area and kill whatever is convenient. You might want to take Green’s town just so you can visit a seminary and perhaps learn a couple extra skills. Otherwise, head for the southern edge of the map and visit the quest hut at (84,141). Once you reach level 18, the demon living inside will give you the Angel’s Blade. Now you can go back to Blue’s part of the map and go through the quest gate at (142,80). Since you’ll pass by one of your towns along the way, ferry some troops to the town, and then re-supply your army before continuing on.

Passing through the portal will take you to the underground part of the map. There you’ll find several islands linked together by dragon portals. So just take a portal, collect the artifact on the island if you want it, and then jump to the next island. (On the first island, you can also access troop buildings for devils and ice demons if you want them in your army. Just take the three-way portal.) It’s a good idea to save on the first island, just in case the battles ahead prove too difficult for the army you have.

Eventually you’ll come to a hero with lots of skeletons, venom spawn, and bone dragons with him. This is the last battle of the scenario, so don’t worry about losses. Just have your vampires attack the hero and the venom spawn to regenerate hit points, and let your ghosts, bone dragons, and other troops take on everything else. It’s probably best if Gauldoth doesn’t get involved. Have him mostly summon and stay out of the way.

Once the enemy hero is dead, continue exploring the island until you find a prison. (Don’t take the dragon exit. It’ll take you to the first island, and then you’ll have to walk back.) Once you visit the prison, you’ll free Kalibarr and win the scenario.