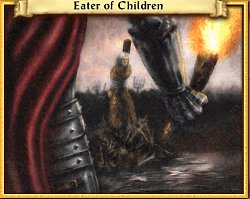 There’s an Orange town right to the north of where you start out, but it’s a Might town, so don’t rush to capture it. (If you do, you’ll probably lose most of your troops.) Instead, recruit from the cemetery and barrow mound, but then separate Gauldoth into one army, and put the other troops into another army. Now you can have Gauldoth grab the treasure chest to the southwest (it might give him a level) and flag the nearby sawmill and ore pit while the other army picks up stuff. Then put everybody back into one army and send them underground (past the berserkers).

What you’ll find underground, right next to the entrance, is a vampire mansion guarded by three vampires. If you put Gauldoth in the back row and your other troops in the front row, and then try to keep Gauldoth as far away from the battle as possible, you should be able to defeat the vampires. It’ll be ugly, but the three vampires it’ll allow you to recruit from the mansion (conveniently already flagged for you) are way more powerful than your other troops combined. 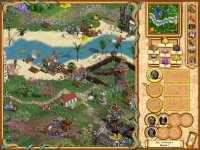 Now you can head back to the surface and capture the Might town, using only the three vampires. You shouldn’t take any losses since the vampires will be able to leech back way more than they lose. You can build up the captured Might town completely, but it’s probably best not to. Just make sure the town has a wresting pit, arena of honor, caravan, and cyclops cave. With vampires and cyclopes in your main army, you should be able to defeat most everything on the map.

Then start exploring. In the rest of the underground area, you’ll find some artifacts and resources, plus Death magic shrines that will teach you all the level one spells. West of your town you’ll find some resource buildings (which you don’t really need) and artifacts. Be sure to pick up the Crest of Valor if you haven’t yet, since it will help the morale of your cyclopes. Also, ignore the dock near your town for now. A quest gate on the other side will prevent the other players from using it, and so you can explore the land south of the river in peace.

At the western edge of the map you’ll find Orange’s other town. It shouldn’t be very developed, and you should be able to take it easily. North of the town you’ll find a two-way portal guarded by some cyclopes. The other side of the portal is blocked by a quest gate that will only let Blue pass, so leave the cyclopes where they are (since they’re helping to protect your lands) and go use the dock on the other side of the map.

You’ll almost immediately find a Green Nature town. You have to capture the town in order to finish the scenario, but between cyclopes, vampires, and poison, it shouldn’t be too difficult to take. However, if the siege does cause you problems, recruit all the skeletons and zombies you can, and add them to your army for the fight.

After you take Green’s town, hunt down any wandering armies Green might have left, and then go north of the town to the underground tunnel. Beyond the tunnel you’ll find a quest gate that’ll only let you pass if you’ve eliminated Green, and past that you’ll find a couple of desecrated graves and couple of level two Death magic shrines. You’ll also find bands of bone dragons in the area, so only visit what is convenient, plus the blue keymaster tent on the right side.

Note: If Blue starts exploring your part of the map while you’re still in Green’s area, don’t worry. Just funnel away all the troops you can (or that you care about) before Blue takes a town.

Once you’re back above ground, start ferrying troops to Green’s former town, and then re-supply your army as you pass by it. You’ll quickly find the blue keymaster gate to the west, and then slightly west of that you’ll find Vitross. There isn’t anything interesting in Blue’s area of the map, so if you’ve already reached level 12, just head straight for the town and take it. Once Vitross is yours, the scenario will end.