To win, you must capture the city of Steadwick within 3 months. Starting Bonus: Inferno Heroes (Map 1) or Dungeon Heroes (Map 2) 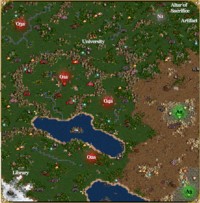 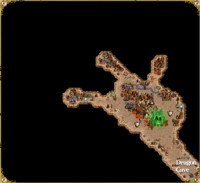 I recommend that you choose the Dungeon Heroes from the second map in this campaign. I am making no judgments on which town is better than the other but say this because you were able to build your heroes magically to a higher extent in the second map. If you didn't do this to at least 2 of your heroes, you will be at a great disadvantage.

Your immediate goal is to nullify the immediate threats to your towns and heroes, build up the Dungeon town, and flag the Dragon Cave (southeast of the Dungeon town) in order to amass a sizeable force of Dragons. This is where having magic heroes comes in handy as you'll mainly be using spells as you take over O4a (northwest of A2) and then O2a (northwest of A3). If you have heroes with Town Portal and at least Advanced Earth Magic you won't have to leave anyone inside the towns because you'll be able to quickly come back to the area if you see an enemy approach.

Now you can relax somewhat while flagging mines and picking up loose resources. Since there are so many wandering stacks, having the Diplomacy skill will enable you to get a head start in having a large army. Unlike other maps where the wandering stacks are either sparse or set to always attack, you will be able to get many troops on this map for little cost. Build up the Dungeon town to get Dragons as soon as possible as well as flagging the Dragon Cave southeast of the Dungeon town. Only start building upgraded structures once you can start hiring Red Dragons with a Castle. Except for the Inferno town (A2) all of the other towns are restricted so only use them for gold, resources, and for any spells you want but didn't get in the second map.

You don't have to really concentrate on building up your heroes because they don't transfer to another map and because there's an Altar of Sacrifice northeast of N1 that you can use to sacrifice useless creatures for experience. Other good spots to visit are the Library of Enlightenment northeast of N2 and the University north of O4a. There's also an great artifact protected by Archangels at the northeast corner of the map. When I played I got the Helm of Heavenly Enlightenment which gives +6 to all primary skills so it's definitely worth it to make a trip up here before facing General Kendall.

Once you have at least 10 Black Dragons (Efreet Sultans can be substituted if you want to use Inferno troops) and a Magic hero with Expert Fire and Armageddon. What I've always done is slipped past the Garrisons by using a hero with at least Advanced Water Magic and the Summon Boat spell. It takes two days to get to Steadwick but it's better than the potential loss of troops by going through a garrison. You can also use Fly, Dimension Door, or Water Walk if you received them in a previous map to bypass the garrison protecting Steadwick. As to the battle with General Kendall, simply use Armageddon repeatedly until everything dies. If you don't have that then Chain Lightning and Meteor will also work well. The biggest threat are the Champions so if you can kill them first or Blind them, the rest of the battle will go much smoother. Once he's killed you only have to take over the castle to win the map.

Since you don't have to actually defeat General Kendall to win this map you can wait until he's away from Steadwick and run past him to the castle. The weak hero decoy trick also works well and since most if not all of the troops are always with Kendall that means Steadwick will be a piece of cake to take over. If you have Fly, Dimension Door, or Water Walk from the previous map then you could win this map within the first week if you wanted to. You might have to use this method since General Kendall might have the Orb of Inhibition which prevents all magic use and since he has so many troops it might not be possible to get enough troops of your own to be victorious.

Many thanks to andi andi who reminded me of the alternative way of winning and informed me of his Orb of Inhibition problem.