CH →
Walkthroughs →
Birth of a Barbarian → Falor and Terwen
﻿

Birth of a Barbarian → Falor and Terwen

Yog must deliver the Celestial Necklace of Bliss and Lion's Shield of Courage to Falor and Terwen to win the scenario. However, if Yog is defeated in combat or loses either artifact, the scenario is lost. Yog is limited to level 21 but will carry his experience and skills on to the next scenario.

Starting Bonus: Badge of Courage or 3 Ogres or 8 Orc Chieftains. 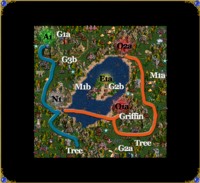 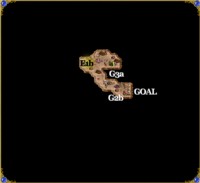 Have Yog visit A1, hire all of the troops available and a secondary Stronghold hero to give Yog some more troops. Head south on the teal path and take over N1. Build creature generators in A1 and visit the recruiting locations for more troops. You can build a lighthouse in N1 so you can make it over the water in one turn and also build a Blacksmith to give Yog a Ballista, especially if he has the Artillery skill. Once you have enough heroes (it's a good idea to use both Stronghold and Castle troops), get on a boat and follow the orange path to take over O1a which is hopefully empty. Continue along the orange path, eliminating enemy heroes as you come across them, until you make it to O2a. There is an enemy hero with Expert Tactics with Attack and Defense in the low teens but once you defeat him, it's only a matter of hunting down the few remaining enemy heroes. Once the enemy is defeated, you can concentrate on finding your way to Falor and Terwen.

There are three Guard Tents that you have to visit before reaching your goal, which is also protected by Archangels so it's a good idea to collect a few troops before facing them. Have Yog visit the Places of Learning, battle wandering stacks for experience and build up the three Castles to give Yog a good force. Be sure to visit the Griffin Conservatory for a chance at some Angels which will help you out greatly. It is probably difficult to gain levels at this point but there are two Trees of Knowledge that you should visit, especially after gaining as much experience as you can through battles.

Once you're happy with how many troops you have, visit G2a, head to the island in the center of the island, go through G2b, and head underground. Visit G3a which is protected by seven ArchAngels, and have your secondary hero visit G3b which is east of A1 and then visit G1a. Have Yog go south, battle the nine ArchAngels, and to G2b. Beyond that is the goal and victory.